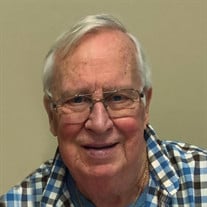 RACINE – Thomas ‘Tom’ Wesley Hinze, age 81, of Franksville, passed away on March 23, 2020 surrounded by his family. Tom was born on March 22, 1939, son of the late LeRoy and Bertha (nee: Nygaard) Hinze and was raised by the late Earl and Anna Warren. Tom was a 1957 graduate of Washington Park High School. On August 30, 1980, He was united in marriage to Leah Schepanski in Chilton, WI. Tom worked for the Racine Public Library as Bookmobile driver for 30 years. Tom was a longtime member of Faithbridge United Methodist Church in Franksville. He enjoyed time with his family, fishing, golfing, traveling, gardening, and bowling. He was an avid fan of the Packers, Brewers and Badgers. Tom will be missed by his wife of 40 years, Leah; children, Carrie (Nick) Zenz, Joseph (Taylor) Hinze, Tom (Kelly) Hinze, Leslie Ehlert, and Laura (Paul) VanDuyn; grandchildren, Ruby, Macie, Lacey, Melody, Stephanie, Zach, Kaitlin, and Jeffrey; great grandchildren, Hailey, Chloe, and Dayton; and many relatives and friends. Tom was preceded in death by his brothers LeRoy, Wesley, Robert, Ward, and John; sister Betty; and grandson Adam. In lieu of flowers at this time, memorials can be made in Tom’s name to Racine Public Library, Faithbridge United Methodist Church in Franksville, or Sierra Club. A celebration of Tom’s life will be held at Faithbridge Church-Franksville Campus, 10402 Northwestern Ave, Franksville, WI 53126, on Friday, August 28, 2020 at 3 p.m. There will be a visitation at the church on Friday from 2 p.m. until time of service. With the current Covid situation, the family understands and respects concerns of attending the ceremony in person. Prayers are entirely adequate. The service will be live streamed and may be viewed by going to the funeral home's website.

The family of Thomas Wesley Hinze created this Life Tributes page to make it easy to share your memories.

Send flowers to the Hinze family.