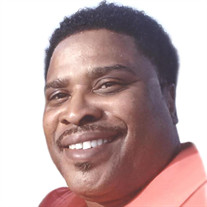 Thomas “Tommy” Sherrelle Mayo’s Journey began in Chicago, IL on May 27th, in 1965. Born to the parents of Ercelyn Garland and Thomas Conner. He had seven brothers and sisters on his mother's side, Joan, Joanne (Eugene "Meatball/Brotha-in-law"), Theresa, Michelle, Michael (Linda), Hercelyn (Charon), and Demetrius (Jessica), and six brothers and sisters on his father's side, Thomas "Pierre", Tanya, Ronald, Amelia, Corhita, and Lashawna. Thomas also had three grandchildren, who he loved dearly, Briasia, Zion, and Zayden. Thomas grew up on 43rd St and in 1992, he had his first child, Laesia “Princess” Gunn. He had his second and third child in 1995, Thomas “Lil Tommy” James and Anthony “Daddyman” Moser. His fourth and final child was born in 2000, Brian “Pookaduke” Mayo. Thomas met the love his life, Tracy Moser, his “Sugawooga”, in 1994 and in 2011, he finally “got what he wanted” after 17 years when he married her. Together, Thomas and Tracy created memories that would last a lifetime and shared a love that was “Til the moon melts.” All who knew Thomas Mayo, knew that he was a great man. He would give you the shirt off his back if you needed it and would give you “his last bite to eat” in the words of his wife. Thomas was happy, funny, silly, and quirky, and his laughter and humor was always a beacon of light. In 2011, he was ordained as a Deacon at Starlight Outreach Ministries and in 2015, he was commissioned as an Evangelist by the Church of Faith. As a firm believer in the Lord Jesus Christ, Thomas loved church and he was extremely blessed throughout his life. Thomas was preceded in death by his Mother Ercelyn, his Father Thomas, and 5 of his siblings: Joan, Joanne, Theresa, "Pierre", and Lashawna. He had a boatload of nieces and nephews, some special to his heart but too many to name, a mother-in-law (Linda), a “daughter-in-love" (Tashia), two other sister-in-laws (Terri and Tina), and one other brother-in-law (Danny), who he loved with all of his heart. Thomas also had two dogs that he never thought he’d love so much, Bella and Chloe. Thomas knew that one day his time would come and told all of his loved ones not to fret. "Don’t cry for me" he would say, "Thanks to the lord, I'm in a better place!” Thomas will truly be missed, but he is no longer in any pain so we must rejoice. His spirit will remain with all who loved him and his legacy will live on by all who knew him forever.

Thomas &#8220;Tommy&#8221; Sherrelle Mayo&#8217;s Journey began in Chicago, IL on May 27th, in 1965. Born to the parents of Ercelyn Garland and Thomas Conner. He had seven brothers and sisters on his mother's side, Joan, Joanne (Eugene "Meatball/Brotha-in-law"),... View Obituary & Service Information

The family of Thomas Sherrelle Mayo created this Life Tributes page to make it easy to share your memories.

Send flowers to the Mayo family.