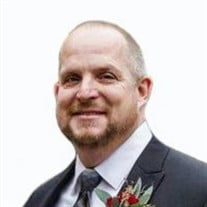 TOLEDO, OH- Timothy Scott Cepukenas, 53, resident of Toledo, OH. formerly of Racine, passed away unexpectedly on Wednesday October 28, 2020 at his residence. He was born on September 27, 1967 to Peter and Rita (nee: Daniels) Cepukenas in Racine, WI. Timothy was a 1985 graduate of Washington Park High School. After high school, he proudly served in the United States Navy. He achieved the rank of 2nd Class Petty Officer working as a Surface Ship Nuclear Propulsion Plant Operator while sailing on the USS Theodore Roosevelt. Tim received many ribbons and medals for his service including the Southwest Asia Service Medal, Navy Battle “E” Ribbon, National Defense Service Medal, and the Sea Service Deployment Ribbon. He graduated from Navy Nuclear Power School in Orlando, Florida in 1987 Tim would enjoy his time taking vacations with his kids and relentlessly rooting for the Green Bay Packers on game day. He was an avid golfer and would often brag about his famous hole-in-one on the sixth hole at the Washington Park golf course. He also enjoyed scuba diving, participating in dives in the Florida Keys, Cayman Islands, and Jamaica. He received his Bachelor of Science degree in Nuclear Engineering Technology from Excelsior College in 2009. Tim moved to Ohio in 2018 to start a new job at the FirstEnergy Davis-Besse Nuclear Power Station in Toledo. He met countless new friends and even spent his free time bartending for the Toledo Mud Hens, a Minor League baseball team. You could often find him hanging out with friends, shooting pool, and playing darts. He also loved to cook and was known for his amazing chicken salad. In recent years, he enjoyed taking his two sons to the shooting range Timothy is survived by his mother, Rita; daughter, Alyssa (Brian) Niechlanski of Racine; sons, Zachary and Dominik of Newport News, VA; brothers, Craigh (Diane) Cepukenas of Milwaukee, WI; Joel (Stacy) Cepukenas of Lakeland, MN; and sister, Michelle (Joe) Maier of Hartland, WI. He is further survived by nieces, nephews, other relatives, and friends. Timothy was preceded in death by his father, Peter on April 6, 2020. A private family funeral service will be held at Sturino Funeral Home on Friday, November 6, 2020 at 1 p.m. A live video stream of the service will be available on the Sturino Funeral Home website.

TOLEDO, OH- Timothy Scott Cepukenas, 53, resident of Toledo, OH. formerly of Racine, passed away unexpectedly on Wednesday October 28, 2020 at his residence. He was born on September 27, 1967 to Peter and Rita (nee: Daniels) Cepukenas in Racine,... View Obituary & Service Information

The family of Timothy Scott Cepukenas created this Life Tributes page to make it easy to share your memories.

Send flowers to the Cepukenas family.