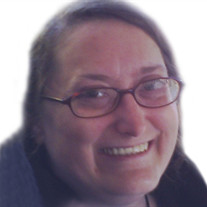 RACINE - Victoria "Vicki" L. (nee: Cook) Peterson, 51, passed away on Tuesday, January 21, 2020. She was born in Racine on June 21, 1968, the daughter of Paul (Kris) Cook and Kathryn McCallum. Vicki was a graduate of Walden III High School. On June 29, 1991, she was united in marriage to Peter Peterson. Vicki had various jobs throughout her life, but was very much a caregiver. She was an avid fan of Japanese culture. Vicki enjoyed reading Manga, and watching Anime. Surviving are her husband, Peter; sons, John (India Garcia Kroska) Peterson, and Robert (Lilly Schoone) Peterson, father, Paul (Kris) Cook, and her brother, Robert Cook. She is further survived by aunts, uncles, cousins, and friends. Vicki was preceded in death by her son, Arthur Peterson, mother, Kathryn McCallum; and grandparents, John and Mary Cook, Arthur and Dorothy McCallum, and Leone Wendt. In keeping with Vicki's wishes, a private service will be held at a later date. In lieu of flowers, donations can be made to St. Jude's Children's Hospital.

The family of Victoria "Vicki" L. Peterson created this Life Tributes page to make it easy to share your memories.

Send flowers to the Peterson family.