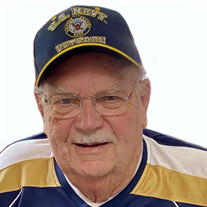 William J. “Bill” Andersen of Racine, Wisconsin passed away on Sunday August 29th, 2021, at the age of 92 at Ascension hospital. He spent the time leading up to his death surrounded by his loving family. A lifelong Racine resident, Bill was born on June 21, 1929, to the late Carl and Hazel (nee: Steffens) Andersen. He was a member of the 1947 graduating class of Washington Park High School. After high school Bill served in the United States Navy from 1951-1953 during the Korean Conflict. On July 10, 1954, he was united in marriage to the love of his life, Patricia Ann Leslie, his “Patti”. He was the owner of Andersen and Klapat Meats in Racine. Loyal customers enjoyed his homemade Danish specialties for 41 years before he retired and closed the market in 1994. Bill was a member of Messiah Lutheran Church for 67 years, serving on the church council for 32 years and singing in the choir. Bill loved to be surrounded by his family and to have an audience for his expert joke telling. He enjoyed playing golf, fishing and bowling. He grew beautiful roses and carefully crafted wood carvings and wildlife paintings, often gifting them to family. He never missed a game, concert, event or any opportunity to cheer on his grandkids. He was a huge fan of the Green Bay Packers and Milwaukee Brewers and loved to host Sunday afternoon Packer parties. He will be remembered as a man of strong faith, with a great sense of humor and a booming laugh that filled up any room. He is preceded in death by his wife Pat, parents Carl and Hazel, and brothers Robert and Warren. He is survived by his children Dave (Kim) Andersen, Karen (Bob) Carlson, Tom (Therese) Andersen, and Jill (Dave) Torgerson; grandchildren Amy (Chris) Kopp, Michael Andersen, Carly Andersen, Tim (fiancée Mina) Carlson, Cathy (Brian) Wolf, Claire Carlson, Rob Carlson, Lynne Carlson, Leah (Jordan) Martone, Alyssa (Frank) Morelli, Ryan (Marisa) Andersen, Matt (Alex) Andersen, and Emily Beck; step grandchildren Keith and Dean Torgerson and Melissa Hainey; great grandchildren Adalie and Micah Kopp, Ethan, Eden and Kellan Wolf, Margaret and Annabel Martone and Audrey and Rocco Morelli, as well as many more family members and friends. Bill’s family wants to extend a big thank you to all of the employees at the 21st Street Culver’s for the kindness, friendship and personal attention they extended to Bill over the years. Thank you, also, to the dedicated staff at the 2nd floor All Saints Cardiovascular Institute for their kindness and care. A family service was held to honor Bill’s life on Saturday, September 4th. He will be laid to rest during a private ceremony at Southern Wisconsin Veterans Cemetery in Union Grove. In lieu of flowers please direct memorials to the American Heart Association.

William J. &#8220;Bill&#8221; Andersen of Racine, Wisconsin passed away on Sunday August 29th, 2021, at the age of 92 at Ascension hospital. He spent the time leading up to his death surrounded by his loving family. A lifelong Racine resident,... View Obituary & Service Information

The family of William "Bill" J. Andersen created this Life Tributes page to make it easy to share your memories.

William J. “Bill” Andersen of Racine, Wisconsin passed away on...

Send flowers to the Andersen family.