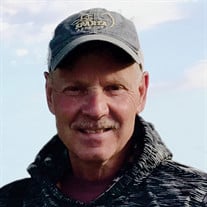 William J. Eldridge CALEDONIA - William 'Bill' James Eldridge, 64, passed away peacefully in his sleep on Thursday, September 27, 2018. He was born in Racine on March 19, 1954, the son of the late Robert and Mary (nee: Zontos) Eldridge. Bill graduated from Washington Park High School in 1972, and attended UW LaCrosse. On August 20, 1977, he was united in marriage to Susan J. Erickson. Bill was employed by the City of Racine DPW, and later retired from the Town of Caledonia. He owned his own roofing company for more than 20 years. Dad instilled a great work ethic in his children, as he was one of the hardest workers that we knew. Bill loved the outdoors, enjoying many different activities; such as, triathlons, softball, football, hunting, fishing, kayaking, cross country skiing, and most importantly, taking nature walks with his grandchildren. His most recent greatest accomplishment was riding his bicycle over 4,000 miles this summer, and only getting pulled over by the police once. Surviving are his loving wife of 41 years, Sue; children, Katie (Dan) Recupero of Stoughton, and Becca (Kyle) Thellefsen of Kenosha; grandchildren, Ava Belle, Anthony James, Olivia Marie, and Lola Sue, sister, Di (Denny) Dalton, brother, Dan (Mary) Eldridge; in-laws, Randy (Meg) Erickson, Patti Esson (Jeff Lunde), Debbi (Dan) Smith, and Jim Kaufman. He is further survived by many nieces, nephews, and dear friends. Bill was preceded in death by his parents; Robert and Mary Eldridge, and Harry and Marion Erickson. In keeping with Bill’s wishes, a private memorial service will be held at a later date. In lieu of flowers, please make a donation to Riverbend Nature Center or Koos for Kids. The Eldridge family would like to extend a very special thank you to Dr. Robert Brown and Dr. James Tierney for allowing Bill to do what he always wanted to do.

William J. Eldridge CALEDONIA - William 'Bill' James Eldridge, 64, passed away peacefully in his sleep on Thursday, September 27, 2018. He was born in Racine on March 19, 1954, the son of the late Robert and Mary (nee: Zontos) Eldridge. Bill... View Obituary & Service Information

The family of William "Bill' Eldridge created this Life Tributes page to make it easy to share your memories.

Send flowers to the Eldridge family.