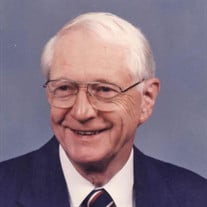 William Turnor Lewis III, 101, passed away at his residence on May 24, 2022. He was born on March 15, 1921 to the late William and Eleanor (nee: Bush) Lewis. Bill served in the United States Navy from May 22, 1942 until April 27, 1943. He was a graduate of University of Wisconsin-Madison. Bill was united in marriage to Ellen Nielsen in 1949, she preceded him in death in November of 1990. He later married Josephine McNeill in March of 1993, she preceded him in death in March of 2006. He will be missed by children, Claudia (Myron) Hawryluk, Corinne (David) Drexler, William T. (Charlotte) Lewis IV, Thomas (Laura) Lewis, stepdaughter, Barbara (Gary) Landa; grandchildren, Erica, Jason, Jenny, Dakota, Montana, Lynette, Ben, and Lauren; and 10 great-grandchildren. Further survived by nieces, nephews, other relatives and friends. Bill is preceded in death by his wives and his siblings, Peggy, Nancy, James and stepdaughter, Carol Skorupan. Memorial service will be held at St. Lukes Episcopal Church, 614 Main Street, on Saturday, July 15, 2022 at 11:00 a.m. There will be a visitation at the church from 10:30 a.m. until time of service. William will be laid to rest with his wife Ellen in Oshkosh in a private ceremony. Special thank you to his faithful caregivers and his many wonderful neighbors. In lieu of flowers, the family requests donations be made to St. Luke's Episcopal Church.

The family of William Turnor Lewis created this Life Tributes page to make it easy to share your memories.

William Turnor Lewis III, 101, passed away at his residence on...